From SacredWiki
Jump to navigation Jump to search
Armor glow

When you combine items (armor/jewelry/weapons) in a systematic way, you can acquire a +15% bonus to a selected resistance type. They are reflected in the inventory screen [I], in the Sacred circle that show your set bonus. i.e. there are four basic kinds of Armor glow: Physical, Fire, Magic and Poison.

Explanation: In order to acquire a resistance bonus and its glow, one needs to collect enough points, and these points are known as "glow points". The requirement is as shown below:

1) 1 point from an armor with a dominant resistance.

2) 1 point from a weapon with a dominant damage.

3) 2 points from an item (armor/weapon) with a dominant resistance and a dominant damage.

4) 1 point from jewelry with either a dominant damage or dominant resistance.

5) no point is earned from an item that does not exhibit a dominant damage nor resistance (e.g., if two resistance values are equal, there is no dominant value)

A boot with only poison resistance will give you one glow point in poison.

A weapon with 100 physical damage, 50 fire damage will give you one glow point in physical.

How to get 2 points from an item? The power of socketing.

We know that weapon only spawn with damage, armor with resistance.

So the trick here is to socket the opposite (damage vs. resistance) into a socket. Thus, socket resistance to weapon, socket damage to armor.

Jewelry has either damage or resistance (but never both) and they cannot have a socket, so only one point is possible. Special Note: There are two (at least) unique pieces of jewelry that do provide both damage and resistance, hence allow 2 points. (See below)

With respect to Armor Glows, only the maximum damage or resistance is considered. Thus, on a sword with 50-70 physical and 10-70 fire damage, only the 70 maximum on both are considered – this sword will yield no glow point since it has two equal damages (and no dominant).

4) Possible Glow Points for a Character

5) How Many Glows Can You Have?

So in order to have all four glows we will need:

For up to three glows the following:

For up to four glows the following:

With the Unique Ring and Amulet described below, characters can increase their maximum glow points, by anywhere from 2 to 6.

With this Amulet and the Sneaking Ring, the Wood Elf easily can get the 4-Resistance-Glow, even wielding a two-handed weapon and no shield.

Even with these items, however, the Gladiator and Seraphim still cannot attain 26 glow points, and thus cannot reach four glows. 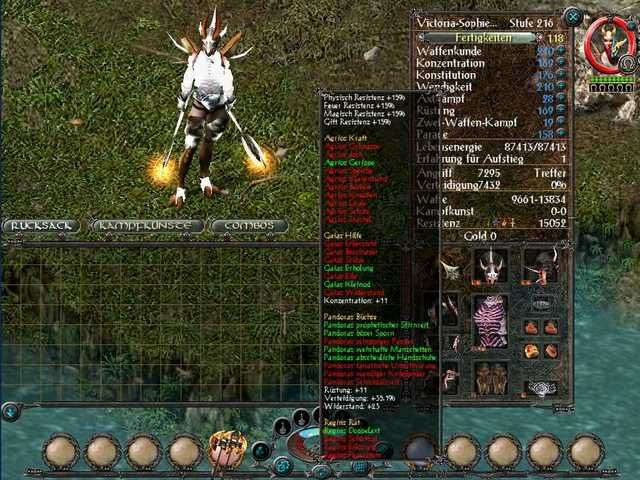 6) Worth It to Keep Track and Maintain all four Glows?

Probably not, except for the exceptionally rare look and perhaps use for pure casters.

1) There are Wood Elf runes with +15% to all resistances.

3) Basically you will always get an armor glow of some sort on your character just because class-specific armor and weapons tend to bear certain dominant resistance or damage type. You will probably unwillingly get physical glow on melee fighters and magical - on casters.

4) Going mono-elemental damage can be more efficient than multi-elemental, so by having a lot of similar-type damage on your weapons, jewelry and socketable items you will win a distinct armor glow (not three, even not two).

5) Its a good idea to concentrate on resistances against the damage type used by deadly monsters, i.e. fire and poison. Getting a third glow or fourth glow is associated with going multi-elemental or sacrificing damage rings for resistance-bearing rings and amulets.

Thus having three or more glows could be considered a bad idea, except for pure casters who do not benefit from damage ring.