From SacredWiki
Jump to navigation Jump to search
Book 5 - Kuan, God of War 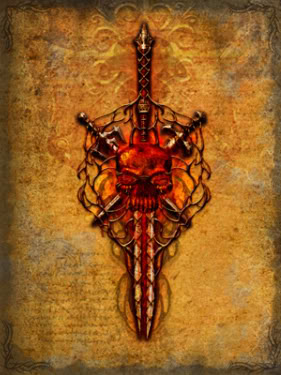 From the Books of Religion
Book 5

Kuan, God of War. This is the god who protects the warrior and fills him with the raging spirit he needs to succeed in battle.

Kuan is the divine personification of the perfect warrior. For him, fighting is the ultimate reason behind all things. All beings must fight and struggle for superiority. As soon they stop fighting, they have lost their reason to live and deserve death. Because only fighting ensures the survival of the stronger, and the elimination of the weaker side and - thus - progress and evolution. Just like a gardener has to remove the dead branches from a tree and the surgeon has to burn out an ulcerating wound, war is there to cleanse the world and constantly eliminate everything that's not strong enough. All contrary aspects such as mercy, compassion and love are just symptoms of diluted weakness, leading to stagnation and poisoning the natural flow of things. There is no alternative to war! Kuan disdains sacrifices or pleas for his favor before battles. He will support the side that is strongest unto itself, without the aid of deities, although his spirit will encourage all warriors.

Kuan is a tall warrior, wearing black, heavy armor, a black cloak that goes all the way down to his ankles and a full helmet that covers his entire head. Although his shape is obviously humanoid, it is impossible to tell what race he is.

Kuan is omnipresent in Ancaria. There is literally no part of the world where he is not known, and where his word and doctrines are not being spread. Since Kuan does not emphasize prayers, sacrifices or being worshipped, the followers of his cult strictly focus on sharing the ideas of the world, war and the reason for living. For them, war is a religion and a God in itself. And Kuan is the driving force behind all this. This is a remarkable difference from all other churches and Gods. There are no holy days in the church of Kuan. Amongst the believers, every battle is automatically considered a religious event. The symbol of Kuan is a sword sticking in a skull.

Although Kuan is in some ways related to Ker, he is actually a separate, isolated deity with his very own, hedonistic views, which does not leave much space for other philosophies.