Sacred 2:Volume 2 - How to Deal with Undead? A Guideline

From SacredWiki
Jump to navigation Jump to search
Volume 2 - How to Deal with Undead? A Guideline 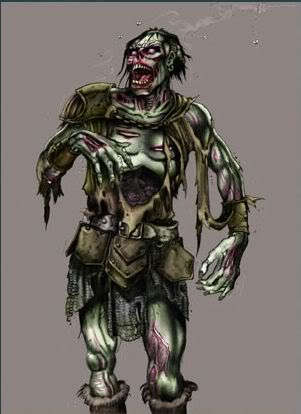 From The Lore of Monsters
Volume 2

How to Deal with Undead? A Guideline

"He moved towards me - swaying, his body oddly twisted and dislocated. His staring squinting look appeared to go right through me. Some strange and indiscernible green liquid oozed from his mouth while he permanently attempted to speak. I drew my sword but then I realized it was not a zombie, it was the captain who was completely drunk on his way to his cabin."


---from the travelogues of Nayjol the Adventurer

Every adventurer has heard of them and many have already encountered them: Marauding zombies on derelict cemeteries, erratic skeletons on historic battlefields, vampires in their shape shift forms as wolves or bats, or ghosts doing their boring spooking routines, undead come in many shapes and forms.

Undead creatures are not only extremely obnoxious, they are also classed as highly dangerous! Many unprepared adventurers underestimated the danger and lost their lives to the 'un-life'. This guide was written to assist the aspiring adventurer in his dealings with undead creatures. "Know thye enemy!" is our motto. Well then, let's meet the enemy!

The lowest form of undead creatures are skeletons, zombies and mummies. All these forms are reanimated bodies without mind or intellect. Reanimating bodies is the simplest form of necromancy, basically dead easy (pun intended) for any conjurer of death. This is probably the reason why these kinds of undead creatures are encountered more often than the other, more complex variations.

The rules of conduct while dealing with skeletons, zombies or mummies are pretty straightforward: If you wish to avoid them, do not go near any cemeteries or battle fields. Catacombs and dungeons are also preferred habitats of these creatures.

If an encounter is inevitable, your choice of actions is rather limited. Each and any attempt to lead a conversation will be futile, thus, you will have to resort to pure violence. However, do be careful! Zombies, and even more so skeletons, are tough opponents. They are held together by necromantic magic and thus, they are able to regenerate severe wounds and even severed limbs within a short amount of time. The magic will only dissipate when the bodies have been completely dismembered and only then will their remains dissolve.

While skeletons and zombies are rather dumb, ghouls do have some sort of ability to think. Ghouls are creatures, which are half dead and half alive. Trapped in this interstage they wander the world without aim, feed on carrion and human bodies and they are typically timorous. Still, attempting to solve an imminent conflict with ghouls by verbal means is also futile. Your first choice should be drawing your weapon.

"Approximately three hundred years ago a blow like that could have killed me!" ranted the ghost before he disappeared through the closed door and left me standing with my sword in my hand.

---from the travelogues of Nayjol the Adventurer

Despite - or because of - their lack of bodies, ghosts and apparitions are dangerous opponents. Average weapons do not have any impact on ghosts. If you intend to stand your ground against a ghost, you will require magic or at least magical weapons. That is the only way these beings can be hurt.

Vampires are the ultimate form of undead existence. They are free, independent and thinking beings with supernatural abilities and powers. They are not created by necromancy, instead, they create themselves. Nobody knows where they came from, yet they exist. And they are extremely dangerous!

Not many adventurers can claim that they encountered a vampire and lived to tell the story. Evidently, a wooden stake, driven through the heart of a vampire will paralyze the undead creature. Furthermore, beheading a vampire will kill it. Contrary to popular belief the use of garlic, holy water and escaping across running waters are all ineffective according to several sources.