From SacredWiki
Jump to navigation Jump to search
Whoops

One of the nuns of the Noriath Temple is worried with something. She seems to be waiting for someone... special. If your character is a Seraphim than she's waiting for you. Her name is Andra and she has a task that can be given only to a winged warrior. Talk to her to learn the detailes. 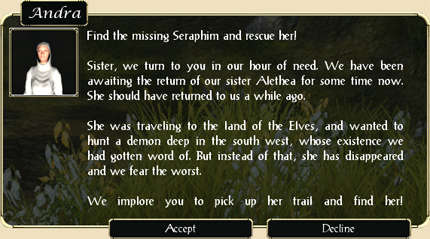 Now it's clear why she was waiting for a Seraphim - the task involves one of your sisters. The Seraphim called Alethea has gone missing and now it's you duty to investigate her disappearance.
So you leave the monastery gates and need to follow quite a long road. The path you should take is marked on the map below.

First you should head south until you reach the Resurrection Monolith. Then you should turn east, keeping south of the few trees. Follow the track around the mountainside to reach an isolated cave entrance.

The traces leaded you to this cave in the land inhabited by many Kobolds. So you walk inside to see what these nasty little creatures are cooking there. After you've worked your way through a few Kobolds, you find the missing Seraphim. Alethea is held captive in a glowing energy 'cage' of some sort.

Talk to her to learn if she knows how to destroy this cage.

Now when you know that the cage is maintained by creatures in the cave, then head further into the cave to find them.

No wonder that these creatures managed to build an energy cage - one of them is a Demon and the other three are its minions, the Kobold Protectors. Now when they're gone, Alethea can free herself. You should return to her and tell her the news.

The glowing cage is gone and the Seraphim is free. She can now get herself out, so she says goodbye and gives you the reward.