Sacred 2:In the Badlands

From SacredWiki
Jump to navigation Jump to search
In the Badlands

When you arrive at the Wastelands Coast, Shirka is waiting for you. She says it wasn't hard following you as you left quite an impressive trail of destruction behind you. That and your dispatches back to the temple were intercepted. Surprisingly she's not there to fight you. Semil died in her arms from the wounds you inflicted. As he was dying she realized that life is fleeting and you were right. She wants to join forces with you. Thus ends the Inquisition Class Chain Quest. Shirka will now travel with you though she is no longer immortal. 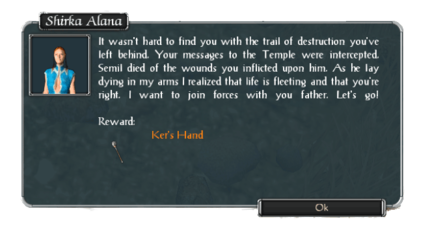 Once you speak with her you will get the Legendary Quest reward. But this quest will remain unfinished according to the logbook. So far there is no known next step in this last quest. Shirka isn't immortal at this point and if she dies the quest will be marked as failed. Most likely it's a bug and the quest was meant to be completed once you spoke with her and got Ker's Hand,