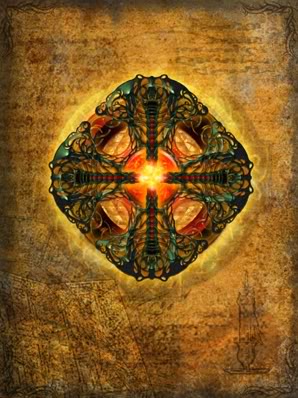 From the Books of Religion
Book 3

Forens is the Goddess of Philosophy and Wisdom. She is the goddess who inspires men to ask the question "why?" She endows people with the power of speech, wisdom, and learning. She is also elusive, just as the answers to the great questions are elusive.

The symbol of Forens is the candle. It represents the light, that's being ignited to bring knowledge into the darkness of the mind. On holy days high priests of the cult wear an embroidered candle on their robes.

Forens is a constant wanderer between the worlds. She is constantly moving around the universes, back and forth into time, but at the same time, she's omnipresent. Whenever a new universe is created, she is the first one to bring "the word" to it, which is a synonym for enlightenment and speech. Because just like living beings, "the word" needs to be created, it doesn't come naturally. For her, a world without words, without thoughts and questions is a lost world, empty and without a soul. Living beings need to learn, because that's what makes them living beings. Therefore, Forens is on an eternal quest, trying to evoke the fire of asking in every race and being.

Like many other Gods, Forens has multiple forms of appearances. In the elven mythology, she's displayed as a beautiful woman, with black hair and shimmering eyes, which - if you look into them - contain the entire universe. From this description she is usually portrayed as a wise woman holding the book of wisdom and the model of studying. In few remote regions, Forens is believed to have no human or even physical form at all, and is instead worshipped just as a shining halo, talking with a deep, soft voice.

Although Forens supports Testa and Lumen, she is actually an independent Goddess and does not interfere much in the struggle between the other Gods. She instead prefers to focus on her eternal quest.

There are temples dedicated to Forens in every bigger town in Ancaria. Especially amongst the intellectual circles, Forens is a very popular Goddess. Every elven University in Ancaria has a small chapel, dedicated to Forens, where students meet every week to pray and ask for blessing and enlightenment. Since Testa stands for Knowlegde and Forens stands for Wisdom, some of the followers of Forens take their books and notes with them to Testa's shrines to share. In the rural regions of the world, the cult of Forens is not as popular, although some local groups in certain elven areas are still worshipping her. A side arm of the main cult follows the "Codex Forens". It's an ancient manuscript, containing long chunks of philosophical and theological text. The author claims, that Forens herself has insinuated everything to him in long sessions of trance and meditation. However, the main cult leaders don't believe this version, so this sub section of the cult is operating independently.