When you head to Sloeford you will see the Messenger near the village square. He has a letter for you. You open the letter and see it's a letter from your parents addressed to the DeElfici's branch office. It's not that far away so you decide to visit.

You travel north to Twainbrook and speak to the merchant there. 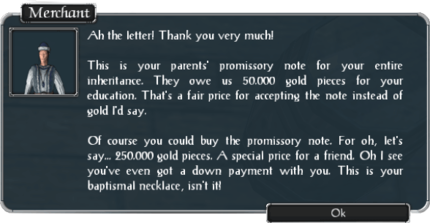 So the Merchant wants your promissory note for your inheritance in exchange for the debt incurred for my education. Where are you supposed to get 50,000 gold. It's either that or I buy the note for 250,000 gold !! He even wants my baptismal necklace as a down payment. There's no way he's getting that kind of money. You decide to head to the local authority and see what they can do.

You embellish the story a little bit. The merchant has it coming for treating you like chattel. Commander Shauir believes your story and even sends 2 Soldiers with you to straighten it all out. So you head back to Twainbrook to confront the Merchant.

Of course, now they're outraged. They didn't seem to mind when they took your necklace. Soon enough a simple disagreement becomes heated and slurs are thrown about.You've heard enough and kill both the merchant and his son. No more debts now. Can't have any witnesses around to contradict your version of the story so the 2 Soldiers have to be eliminated too. Time to go back to Commander Shauir and and concoct some story he'll believe.

Well that was easy. He believed my whole story !! So much for military intelligence. He's going to look more into the DeElfici family business. He even gives you a letter to give to a general in Thylysium about the recent events. Well, might as well play this out and see where it goes. You head to the city and speak with General Whimsical

The General doesn't want to believe your story. The patriarch of the DeElfici family, TyBosso is a well respected and powerful man. But since Commander Shauir has also raised concerns, the general agrees to a test. You will take a stolen shield to his family and see if they will buy it. But you have something different in mind. You'll hide the shield in one of their houses and then call the guards. Your promissory note should gain you access. So you head to a house just west of the arena.

Well getting access was easy enough, let's see what the DeElfici family member has to say. You talk to Hyderia, wife of TyBosso. Unfortunately she recognizes the coat of arms on the shield and instantly knows it was stolen. She tells you to leave but without the promissory note. She calls for her guards to escort you out.

You defeat the 4 guards and then turn your sights on Hyderia. She knows too much and will ruin all your plans. You probably can't buy her silence so you decide she has to go too. You work on your story about how you simply found them dead as you head to TyBosso to tell him the news. You'll find TyBosso in the Army Camp next to General Whimsical.

He accepts your story and believes there is a conspiracy designed to bring his family down. He thinks you are courageous and wants to hire you to find the murderers. If only he knew the truth! He's sure Dylaith and his gang are behind all of this

You head into the sewers and find Varnar in a large circular room.

He knows that you killed Hyderia and in the aftermath and confusion his gang was able to kidnap Glydial, TyBosso's grandson. But instead of trying to eliminate you, he offers a place in his 'family'. Your conversation is interrupted when Soldiers appear in the dank and dark tunnels. They must have followed you or Varnar down into the sewers. After you dispense with them, city guards really aren't much of a challenge, you continue your conversation with Varnar.

Varnar wants you to take Glydial back to TyBosso, further ingratiating yourself into the DeElfici family. Of course Varnar wants a piece of the action. Now you may be many things but you're not a robber. Things go badly very quickly and Varnar and his thugs attack you. Once you've defeated this riff-raff you see Glydial standing a few feet away. Now what to do with him?

Seems Glydial doesn't want anyone to know what happened either. For some reason you decide not to kill him, probably since he is so young. You do have some morals after all. You escort him back to his grandfather.

He is ecstatic to have his grandson back safe and sound. He excuses all of your debts and even hands you a letter gaining you access to any of their branch offices. He asks if you're interested in delivering a letter to the business house just south of Dragonmaw Pass. You accept his request, revenge is more fun than you thought against this family. So off you go north of Clearview in search of the office.

You speak with the Substitute. He lets you right in after showing the letter. He has a package that needs to be delivered to Marys DeElfici in the Human Lands. For a chance at another DeElfici, you cheerfully agree to deliver it. Head through Dragonmaw Pass north a short distance to where the Horse Trader and Merchant are located. You'll find Marys over by the stables.

Marys asks for the package but that's not what you're there for.....

Talking to Marys ends DeElfici I - The Promissory Note and begins the next part, The Human Branch